You can find our most recent news listed below.  If you would like to see a specific category of news, like Crime Alerts or Press Releases, use the navigation menu. 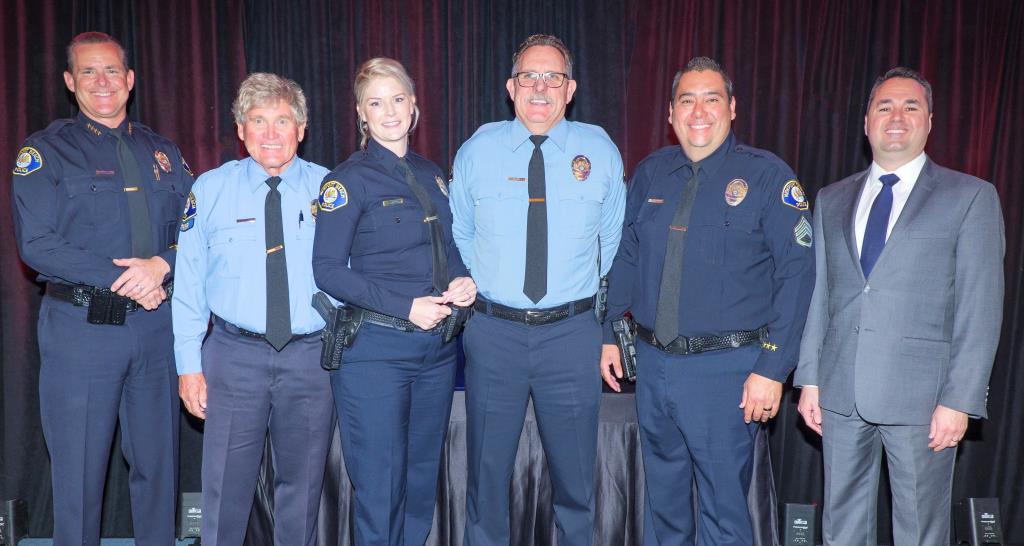 Today, the 49th Annual Police Appreciation Breakfast was held at the Hyatt Regency, John Wayne Airport Newport Beach. The event was hosted by the Newport Beach Chamber of Commerce and the Commodores Club and sponsored by Hoag Hospital, Julie Laughton Custom Homes, Orange County Supervisor Lisa Bartlett, and the Newport Beach & Company. Members of the Police Department were honored at the breakfast, which was also attended by city staff, community leaders, and local business community members.

Please join us in congratulating the following members of the Newport Beach Police Department who received recognition today:

Additional awards were received as follows:

On April 8, 2021, Police Officers Kyle Cameron, Adam Daymude, and Tyler Machado were dispatched to a home where a man was having a heart attack. Officers found the man lying on a bed, unconscious and not breathing. Officers Cameron and Daymude immediately moved the man to the floor. They began performing chest compressions before Officer Machado used an Automatic External Defibrillator to administer a shock to his chest. The man regained consciousness, and the officers monitored his condition until Fire Department personnel arrived to transport the man to a hospital, where he was stabilized and received additional care.

On September 5, 2021, the Police Department received a 911 call for a man having a heart attack at the Newport Beach Elks Lodge. Within moments of the first call, the dispatch center became inundated with more calls about the same incident. Although Dispatcher Langham was assigned to a radio position, he started assisting with the incoming telephone calls without hesitation. Langham identified that Sergeant Michael Striek and Officer Alexander Shenasi were the closest units to the Elks Lodge and dispatched them for an emergency response.

Upon arrival, Sergeant Striek and Officer Shenasi found the man lying on his back, unconscious, with no pulse. Sergeant Striek began chest compressions while Officer Shenasi prepared the Automated External Defibrillator. After two electrical shocks, the man regained consciousness. He was transported to a hospital by Fire Department personnel and made a full recovery.

On July 27, 2021, Officers Benjamin Arnett and Kyle Cameron were on patrol when they responded to a vehicle fire near the 73 Freeway and the Birch Street overpass. Upon arrival, officers found a car that appeared to be in a traffic collision and engulfed in flames. Officer Cameron immediately opened the driver’s door and pulled the unconscious driver out of the car and to safety, as Officer Arnett checked the car for additional passengers. Once to safety, officers determined that the man was exhibiting the signs and symptoms of an opioid overdose. Officer Arnett administered Naloxone, a nasal spray commonly carried by first responders and used to counteract the effects of opioid ingestion. Within minutes, the man began to regain movement in his arms and legs. The officers continued to monitor his progress until Fire Department personnel responded and transported the man to a hospital to treat his injuries further.

On December 4, 2021, Officers Austin Laverty and Brian Park responded to a home where a young woman was suffering from a mental health episode and attempting to commit suicide by hanging herself from a tree. The officers rushed to the yard and found the young woman hanging unconscious from a homemade noose. The officers immediately joined the mother in lifting the young woman, relieving the pressure of the cord around her neck as Officer Park cut the cord from the tree, and they safely lowered her to the ground. The officers worked together to remove the noose from her neck and render medical aid until she regained consciousness. She was then transported to a hospital, where she made a full recovery.

On the morning of June 18, 2021, the incoming patrol shift was holding their morning briefing when an employee suddenly fell from his chair onto the floor. Sergeant Steven Oberon and Officers Tyler Eisenhauer, and Isaac Furnari immediately rushed to his aid. They recognized that he was suffering from a heart attack and quickly began lifesaving measures. Officer Eisenhauer cut through his shirt, and Sergeant Oberon administered the Automated External Defibrillator while Officer Furnari began chest compressions. Officer Butler, who was in the Police Department’s parking lot, heard the radio broadcast of the emergency and responded with his CPR mask to assist with rescue breathing. After a shock from the AED, the employee regained consciousness. He was transported to a hospital for additional care, where he made a full recovery and has returned to his position at the Department.

On March 3, 2021, at 1:40 a.m. Officer Kyle Markwald was finishing up on a call in a residential neighborhood as a car drove past him and caught his attention. The passenger was deliberately attempting to conceal himself from the officer. Officer Markwald had previously arrested the car’s owner for possessing illegal drugs and trying to sell an unregistered gun. A license plate check found that there was also an active warrant tied to the car.

Suddenly, the car stopped, and the male passenger jumped out of the vehicle and started running towards a nearby apartment complex adjacent to the neighborhood school. Officer Markwald pursued the suspect, and after a short foot chase, the man fell to the ground and removed a concealed item from his waistband. Officer Markwald immediately detained the man, finding a loaded .45 caliber handgun in a nearby planter that the man tried to dispose of before the officer detained him.

The suspect was identified as a convicted felon and was arrested for multiple charges, including possession of narcotics and possession of an unregistered firearm. Further investigation revealed that Officer Markwald’s presence had interrupted the illegal sale of this firearm. Additionally, officer Markwald’s actions ensured that the gun was located and removed from the vicinity of the school hours before students returned to campus in the morning.

On May 23, 2021, Officer Christine Maroney was working patrol when a concerned citizen flagged her down. The citizen told Officer Maroney that he had seen a distraught woman climb outside the railing on the Via Lido Bridge in an apparent attempt to jump off the bridge. Less than two months later, on July 12, Officer Maroney was dispatched to a similar call for assistance at the Goldenrod footbridge, where a despondent man was spotted outside the railing.

On both occasions, Officer Maroney started speaking with the individuals in distress and learned that they intended to end their lives by jumping from the bridges. Using her training and experience as a crisis negotiator, Officer Maroney carefully developed a rapport with each person. She patiently and empathetically spoke to them at length until both the man and woman agreed not to jump and climbed back over the railings to safety.

Officer Maroney continued to speak with and support them after the crises had stabilized. As hoped, both people accepted the offer of additional assistance and were transported to local hospitals, receiving medical treatment and mental health evaluations.

On November 26, 1980, 42-year-old Judith “Judy” Nesbit was tragically killed while showing her family’s boat to an unknown male attacker. Under the guise of an interested buyer, the man asked Judy for a tour of the boat. Instead, he followed her into the sleeping quarters and accosted her before taking her life. Before fleeing the scene, he then stole her credit cards, checkbook, and cash from her purse. The killer was never apprehended, and the case went cold for nearly forty years, despite generations of Newport Beach Police Detectives continually working on the investigation.

In September 2018, Sergeant Court Depweg analyzed evidence left at the original crime scene and discovered hairs that, on further investigation, did not belong to Judy Nesbitt. These hairs, which detectives had not examined for nearly 38 years, were a new development; however, the hairs were not suitable for traditional DNA testing.

Investigators did not give up. Through the cutting-edge work of Green Laboratories, LLC, an expanded DNA profile was able to be extracted from these hairs two months later. It would become the first DNA extraction of its kind in the United States used to identify a murderer in a criminal investigation. Armed with this DNA profile, Sergeant Depweg and Cold Case Investigators Michael Dugan and Bryan McMahon pursued investigative leads from local laboratories, a genetic database, and a genetic genealogist.

On May 2, 2019, they identified a person of interest: Kenneth Elwin Marks. They learned that Marks was living in Orange County at the time of the murder and that he matched the description given by a witness in the original crime reports. In addition, further review of the 1980 reports showed that the Nesbitt family had suggested Marks’ name as a possible person of interest during the initial investigation. Still, he had not been pursued as a serious suspect.

It was discovered then that Marks had passed away in 1999. The detectives continued to spend more than a year gathering additional corroborating evidence in the absence of a living suspect. Finally, in July 2020, Sergeant Depweg and Detective Fletcher went to Texas to oversee the exhumation of Marks’ remains for further DNA testing.

On August 9, 2021, the Newport Beach Police Department announced that Kenneth Elwin Marks had been identified as the person responsible for the murder of Judy Nesbitt. The complex case file was presented to the Orange County District Attorney’s Office for review. Based on the evidence obtained during the investigation, the DA’s Office found that Marks would have been formally charged with first-degree murder with special circumstances if he were still alive today.

At the Awards Ceremony, the Police Department also premiered a video entitled “Our Shift Never Ends”. The video can be accessed at https://www.youtube.com/watch?v=DJlsLZVP95o.